Just bought an Instant Pot and don’t know where to start? We’ve gathered up 10 of our best (and most delicious) Easy Instant Pot Recipes for beginners, ranging from breakfast to dinner!

At Lexi’s Clean Kitchen, we’ve been loyal Instant Pot users for years now. But that doesn’t mean we’ve forgotten how scary it was in the beginning to first use the Instant Pot! We’ve gathered up some of our favorite Easy Instant Pot Recipes for the newbies out there to help you learn how to use this amazing appliance. We’ve handpicked these recipes for you to cook through to familiarize yourself with how the Instant Pot.

Why We Love the Instant Pot

We could sing praises all day about about why we love the Instant Pot, especially for easy dinners or meal prep. This appliance is not only good for making quick work of typically long braised dishes like beef barbacoa or pork carnitas. It’s also great for easy weeknight dinners that don’t actually require much hands-on cooking. We love utilizing the Instant Pot for nearly all of our cooking, where it makes sense. Read on for more information on that. 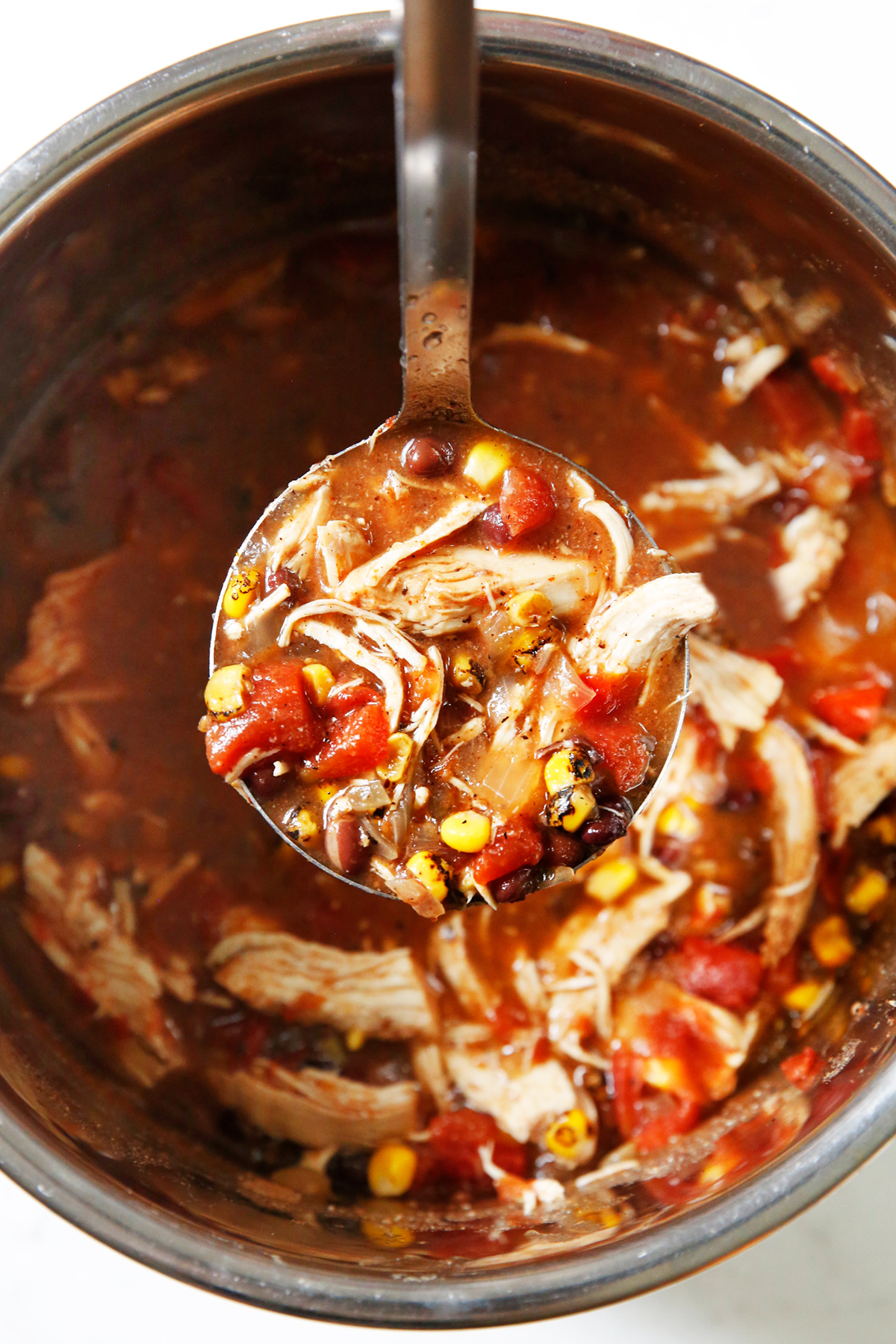 What to Cook in the Instant Pot

So that then begs the question: if you have to cook the food twice, what is the point of even cooking it in the Instant Pot? The answer is because of what that actual pressure cooking does to the food. The Instant Pot transforms some food into something way more delicious. For instance, cooking a whole chicken. Is it quicker to cook a whole chicken in the Instant Pot, compared to an oven? Not necessarily, but we love how the chicken tastes after it’s been cooked in the Instant Pot. So that makes sense to use this machine for that. 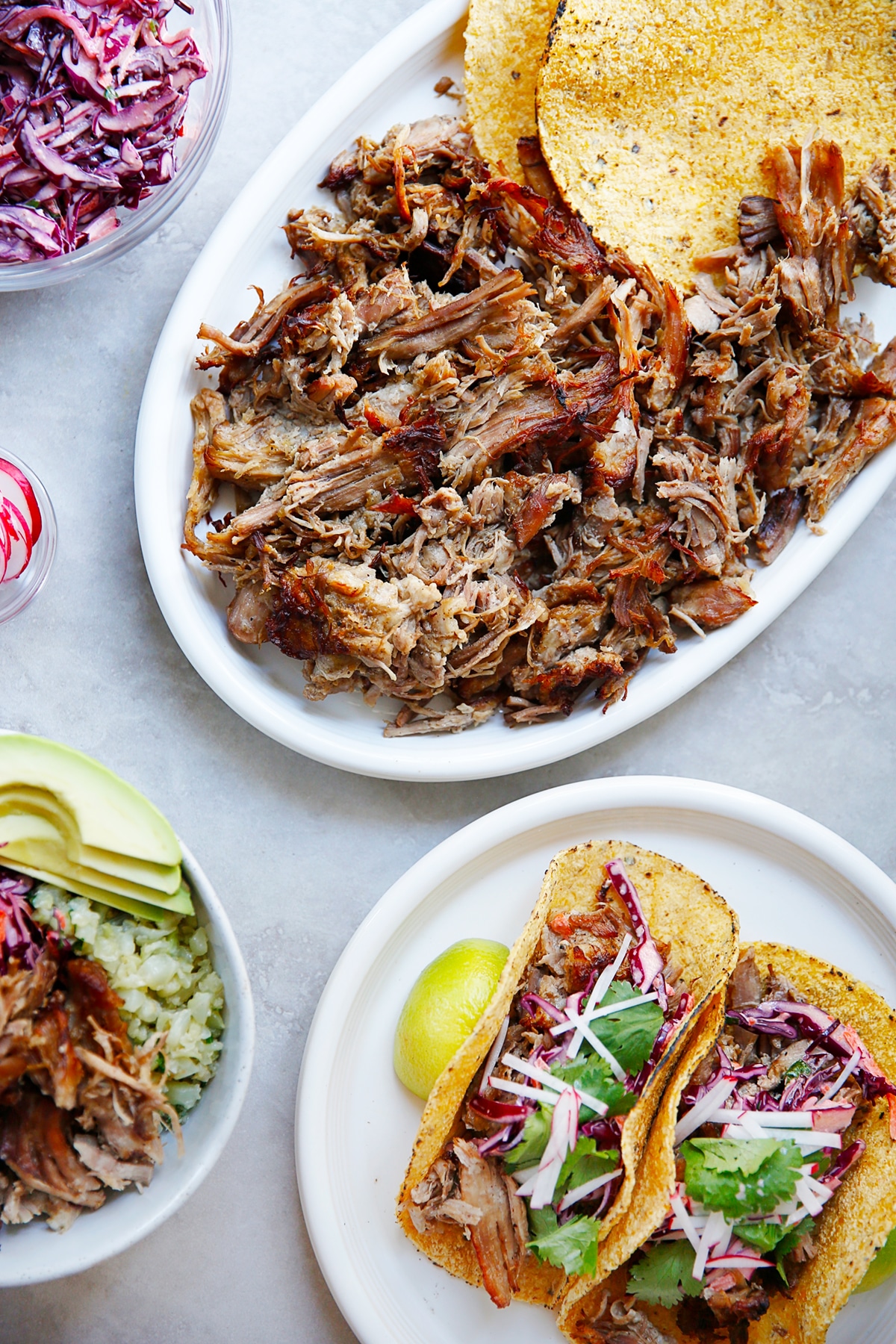 Pressure Release Valve: This is the knob on the top of the lid of the Instant Pot that seals in the steam that creates the pressure. When you are using the pressure cooker, it should be in the “Sealing” position. It doesn’t lock tightly, but merely moves from one position to another. This is also the valve you must move when you are finished cooking to release the pressure quickly (see below).

Natural Pressure Release: A recipe will indicate how you are to release the pressure after the food has finished cooking. If it indicates Natural Pressure Release, you will keep the pressure release valve to the “sealing” positiong. Sometimes a recipe will say a natural pressure release for only 10 minutes. After the machine indicates an LO 10 on the interface , you will then move the valve to the venting position and release any remaining steam. LO indicated the lapsed time since the pressure cooker timer has finished.

Liner or Pot: This is the actual vessel that you cook food in. It’s the metal inner liner that can be removed from the Instant Pot to clean. 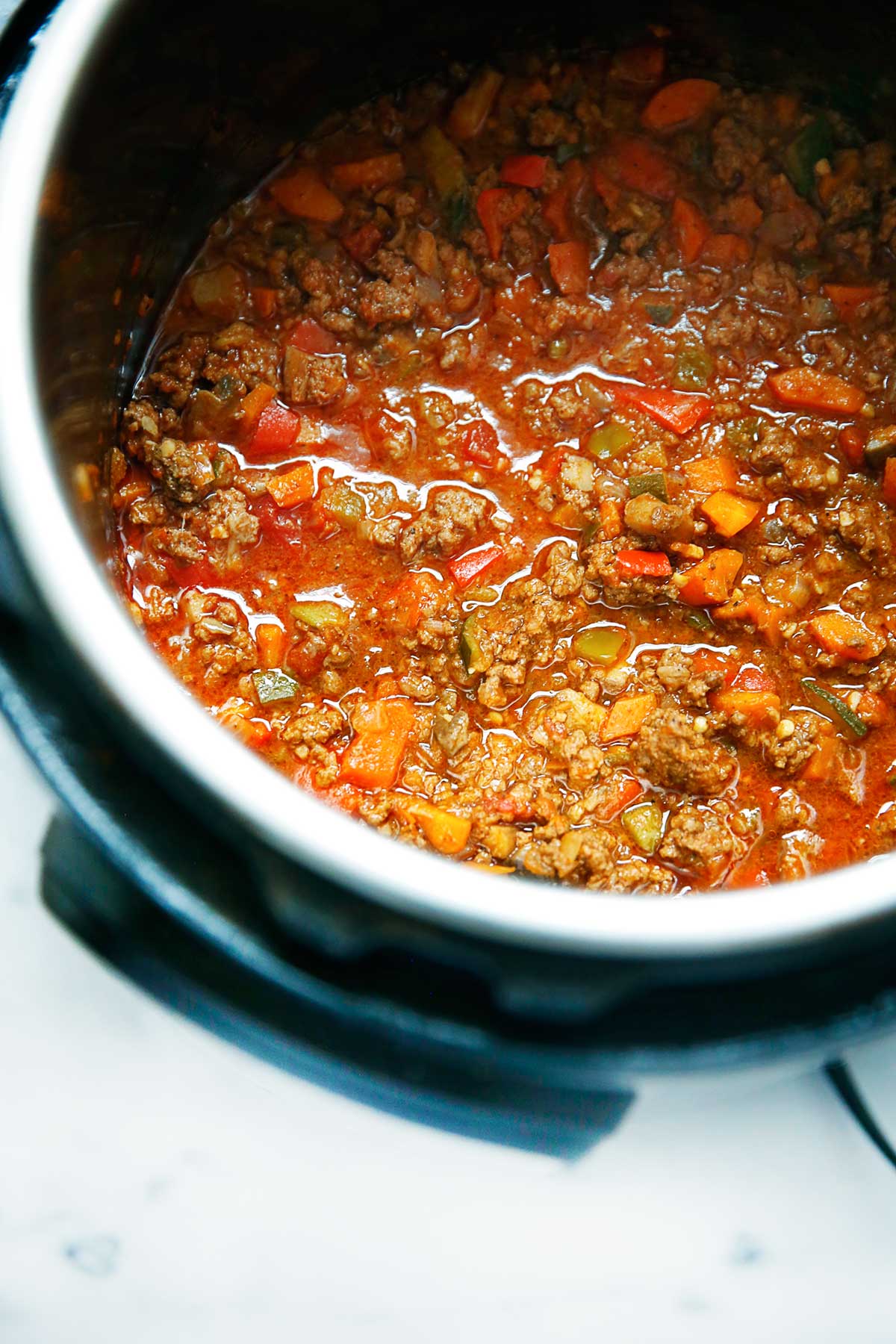 Instant Pot Southwest Chicken Soup : This Southwest Chicken Soup is pure comfort food in a bowl. Southwest inspired flavors like chicken, tomatoes, corn and lime are mixed together in an easy to make soup. What makes this even more special is that you can prepare batches of this ahead of time and place in the freezer for the next time you need an easy dinner! Don’t care to meal prep this soup? No problem! Just place everything in your Instant Pot pressure cooker fresh and dinner is ready in just about 20 minutes.

How To Make Chicken Broth: Ever wonder how to make chicken broth? This chicken broth recipe is my favorite, and I love making it in my Instant Pot for time convenience! It’s so flavorful and delicious in various recipes or just to sip on! Instead of buying chicken to use, save your leftovers and veggie scraps to make TONS of chicken broth at an affordable price!

Pork Carnitas (Instant Pot and Slow Cooker)Ever wonder how to make chicken broth? This chicken broth recipe is my favorite, and I love making it in my Instant Pot for time convenience! It’s so flavorful and delicious in various recipes or just to sip on! Instead of buying chicken to use, save your leftovers and veggie scraps to make TONS of chicken broth at an affordable price!

Classic Chicken Soup (Slow Cooker & Instant Pot) There is no better cure for anything than Chicken Soup. The chicken and broth warms the soup, and the vegetables brighten everything up. It’s a classic for a reason! Plus this Slow Cooker Chicken Soup is simple to make and easily freezes!

How To Make The BEST Taco Meat (In The Instant Pot!) Want to make the BEST taco meat ever? This taco meat recipe is loaded with hidden veggies and is made in the Instant Pot pressure cooker! It comes together in under 30 minutes and tastes like your favorite classic, indulgent taco meat! It’s whole30-compliant and a recipe the whole family will love! 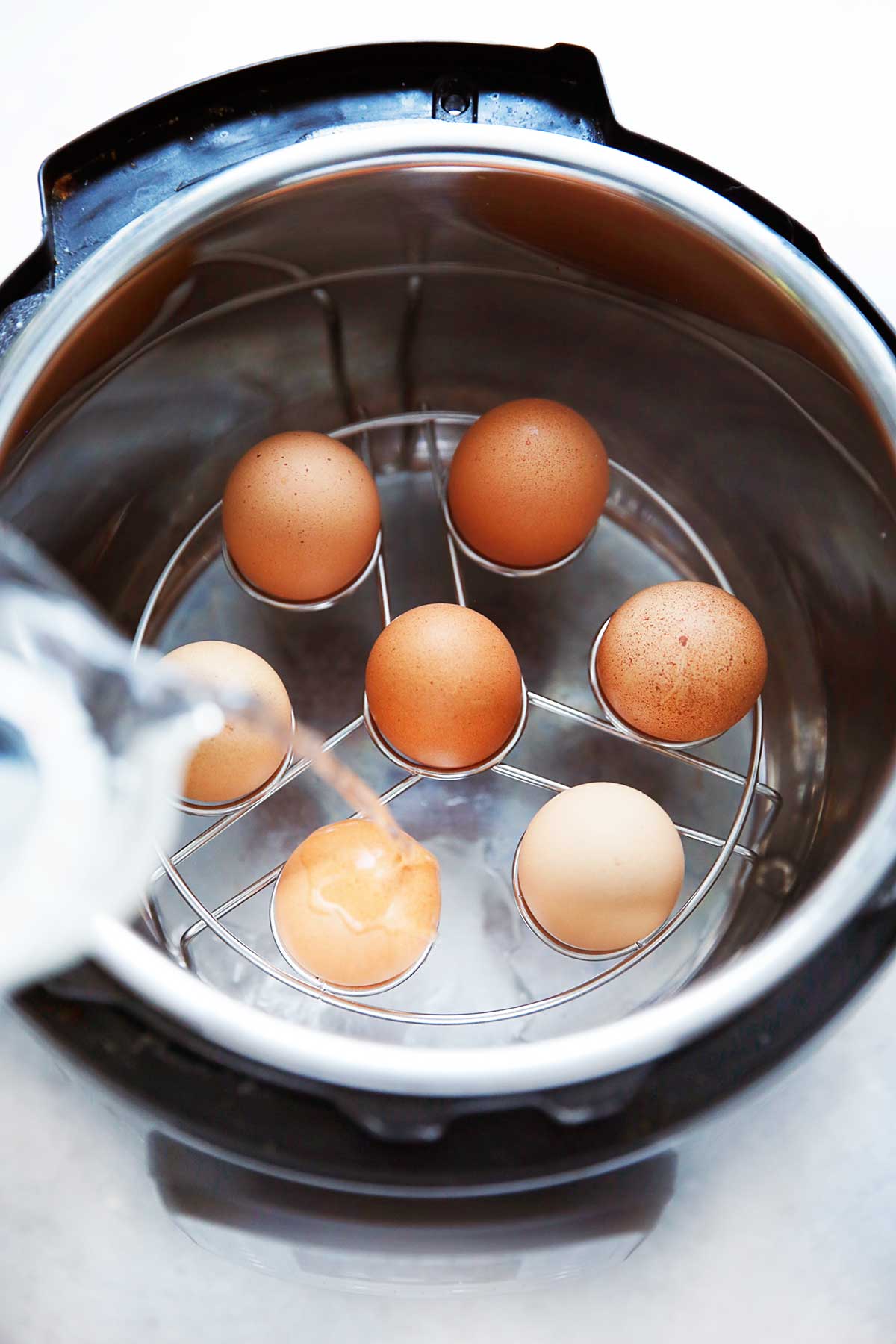 How to Make Instant Pot Hard Boiled Eggs :Instant Pot hard boiled eggs are the easiest method to making them to perfection each and every time. They’re a hands-off cooking method and the best part: they’re so easy to peel!

The Ultimate Guide on How to Make Oatmeal : This is the easiest method to make rolled oats that results in a super creamy oatmeal that doesn’t require any stirring and is done in around 30 minutes, which means you can start it as soon as you wake up and breakfast will be done for you (and your family) by the time you’ve showered and gotten ready!

Instant Pot Rice If you’ve ever thought rice was a plain-nothing-special side dish, this recipe on How to Make the Best Rice Ever (either in the stove top or instant pot) is for you! It’s the perfect recipe to pair with just about anything, is largely hands-off cooking time and is flavorful thanks to added onion, garlic and toasted noodles.

Instant Pot Chicken Wings This Honey Mustard Chicken Wings recipe can be made in the Instant Pot or baked in the oven, and they are a crowd please. A perfect game day or dinner wings recipe that everybody will love. They are paleo-friendly and totally gluten-free, and get perfectly crispy with the right amount of sauce-y goodness!

These Gluten Free Peanut Butter Blossoms have all the flavor of the traditional, but using better-for-you ingredients! These peanut...

Using only 5 ingredients, this Peppermint Bark is simple to prepare and perfect for giving away...

Love Trader Joe’s Everything but the Bagel Seasoning but your store doesn’t have it in stock frequently? Our recipe is so easy...

Crispy on the outside and soft and chewy in the middle, these Gluten Free Chocolate Chip Cookies are the real deal. They’re also...

This Thanksgiving Leftover Breakfast Hash is the perfect post holiday meal! It uses a mix of sweet...