Low Carb Cinnamon Apple Pancakes pack in so much delicious apple and cinnamon flavor and are surprisingly low in carbs, paleo friendly, and gluten free.

In my opinion, the combination of cinnamon and apples makes the very best addition to pancakes. I am getting hungry just thinking about it, especially since we are in the prime of apple season. As kids we would go apple picking every year and come home with mountains of apples that would inevitably find there way into all kinds of dishes. Most of them would end up in my grandmother’s incredible homemade applesauce, but as we began to hit raw apple overload, we would have to get creative. Baked goods, oatmeal, savory pork and chicken dishes, you name it. But one of my favorites was always pancakes.

The trick to keeping these cinnamon apples pancakes low carb is using unsweetened applesauce and coconut flour. You could also add some apple extract to bump up the apple flavor even more. Everything is combined in the blender to make a super easy batter and then you can make pancakes or waffles. If you aren’t watching carbs too closely, consider adding shredded apples to the batter for even more apple goodness. 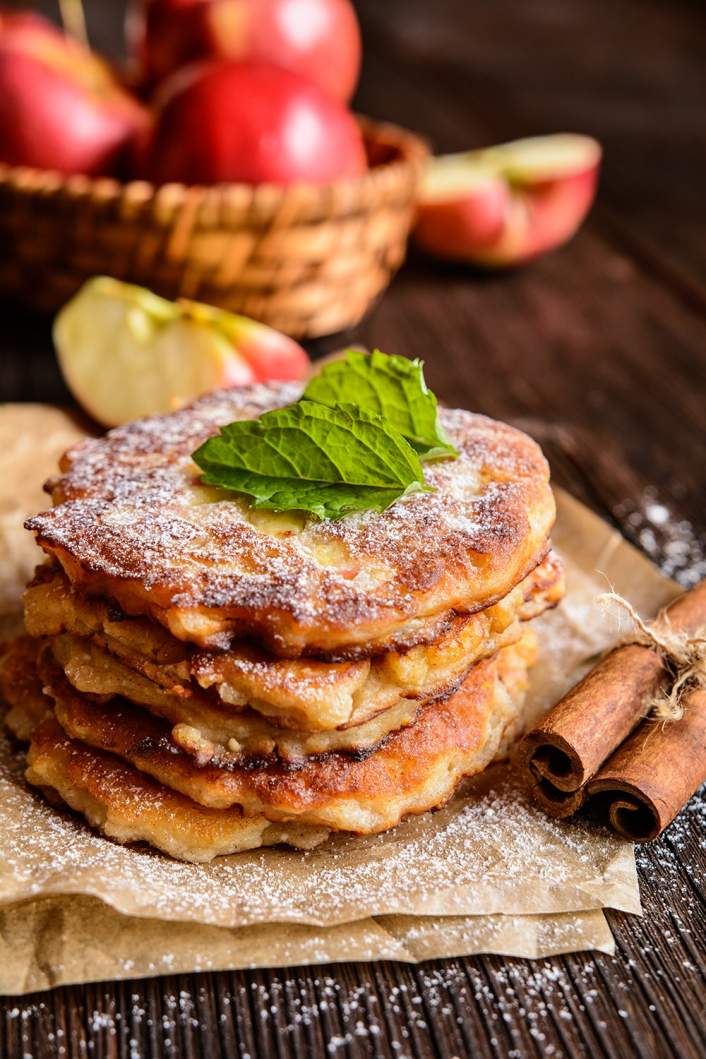 Now let’s talk toppings since any good pancakes has got to have some amazing toppings. Usually I like to top these with melted nut butter – almond butter or peanut butter warmed up for a few seconds in the microwave and drizzled over top. If I am not watching my carbs, I like to top these with grated raw apples or some quickly sauteed apples. Honey, maple syrup, apple butter, and powdered sugar are also all delicious.

Here are some things to keep in mind when making these Low Carb Cinnamon Apple Pancakes:

Looking for other healthy apple recipes?

Here are some of the products and tools I used in this recipe:

This post originally appeared in 2013 but has been updated with new photos and additional recipes tips and tricks.

Honey Soy Chicken with a simple five ingredient sauce is the perfect combination of sweet, savory, and just the right amount of...

This easy Honey Garlic Chicken and Asparagus is a weeknight staple since it uses simple ingredients you likely have at home. Plus it is...

This 30 Minute Low Carb Beef Chili is packed with chili flavor without the carbs! By leaving the beans out of this keto chili, you can...

These Three Ingredient Banana and Egg Pancakes are a staple in our house. I make them almost every week and love that I can quickly...