The Chinese Cleaver Is a Serious Contender for 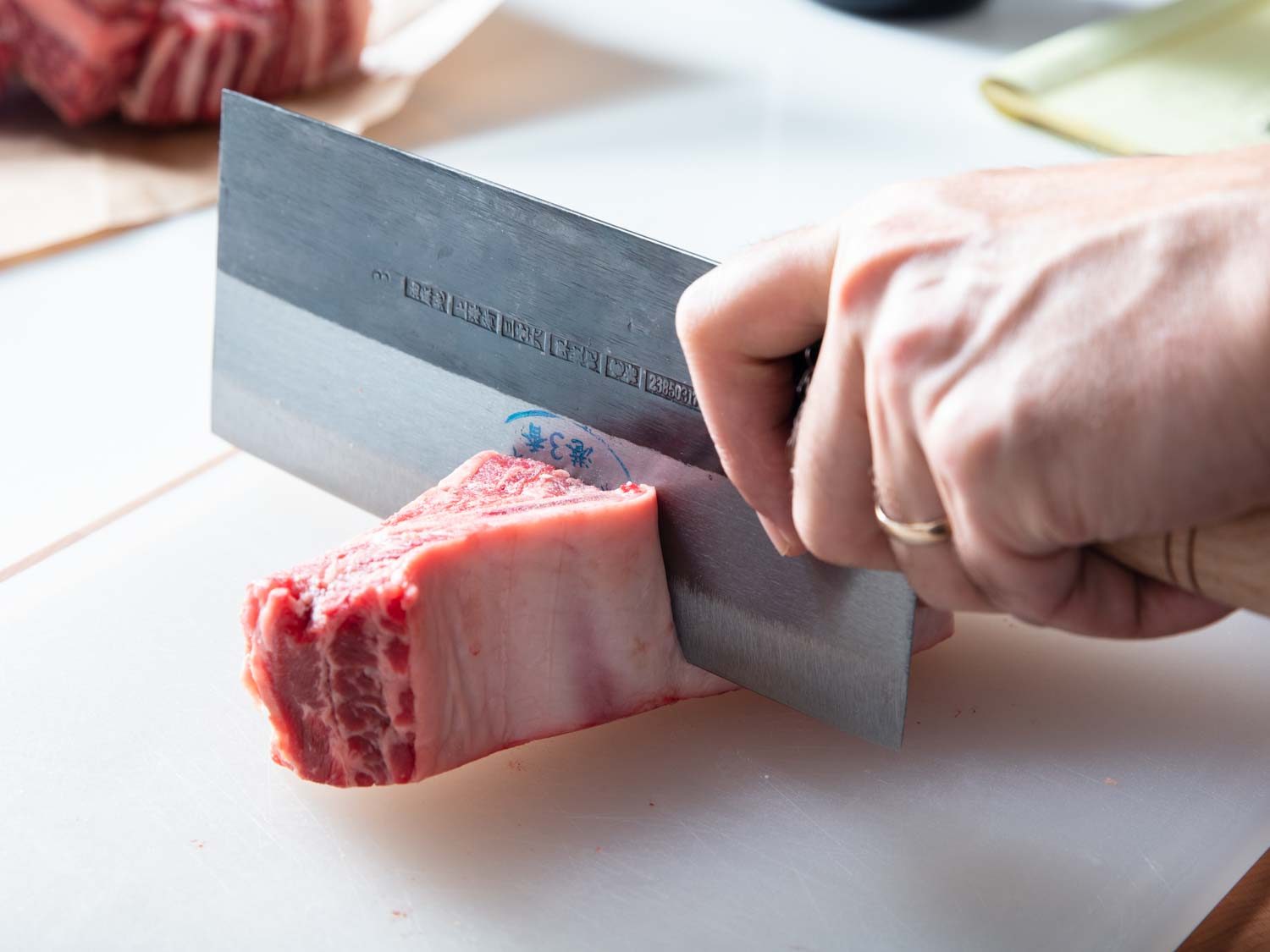 Using a carbon steel Chinese cleaver to split beef short ribs between the bones; the knife can slice through meat but isn’t intended to break through tough bones.[Photographs: Vicky Wasik]

You know you’ve worked in a profession for a long time when you relearn something you used to know without initially realizing you used to know it. That happened to me a few weeks ago, when Fuchsia Dunlop spent the day in our test kitchen to shoot a few videos about Sichuan food and promote the revised edition of her masterful cookbook on the subject.

She brought her own knife, a carbon steel Chinese cleaver, and set to work finely shredding ginger, mincing garlic, and cutting beef tenderloin into paper-thin sheets. I watched, I marveled at her skill with the knife, and we talked about it—why she loves it, how versatile it is, how it needn’t be limited to Chinese food.

It all seemed new to me. And then, slowly, I began to remember that it wasn’t.

I am, or at least I had been, well aware of the virtues of the Chinese cleaver because I had used one every day for several months while working in a French restaurant about fifteen years ago. I loved that knife, but over time, I reached for it less and less as new knives entered my life. Fast-forward to my time working at Serious Eats, where more knives pass through my hands than I can keep track of (thanks in large part to the equipment reviews I write), and my brief relationship with the Chinese cleaver faded away. I’ve spent so much time in recent years debating the relative merits of Japanese and Western knives, which tends to be where the conversation is focused among knife enthusiasts in the United States, that I’d forgotten this third option and just how rightly it belongs in the running.

I went home that night after filming with Fuchsia and found my old cleaver at the bottom of my extra-knives drawer at home (yup, I have an entire kitchen drawer for the knives I don’t use). There it was, the Dexter-Russell stainless steel cleaver that had at one point been in my palm nearly twelve hours a day, six days a week. It reclaimed its space on my cutting board and has been getting some overdue attention after years of neglect.

I also ordered a Chinese cleaver in carbon steel, a knife material I’m very fond of, and have been using it at work. (Carbon steel is more prone to rusting, but it is often easier to sharpen than stainless.) Sho, it turned out, was similarly inspired and grabbed a different carbon steel option, coincidentally from the same online knife merchant I used. Which is to say the Serious Eats culinary team has gone from zero Chinese cleavers in active use to several practically overnight.

The main question I’ve been left with is why I ever let this style of knife, called a caidao in China, fall out of use and then memory, given how good it is.

One thing to make clear about this type of Chinese cleaver is that it’s not really a cleaver. In fact, calling it a “cleaver” is a bit of a misnomer. Yes, it’s shaped like a cleaver, but in use, it has nothing in common with those thick, bone-crushing butchers’ knives. (There is a thicker and heavier Chinese cleaver intended to break bones called a gudao, but that’s a different knife.)

You wouldn’t want to use one of these to hack through even the smallest bones; the blade is large, but it’s thin and delicate. Instead, it should be used for the types of tasks you might reach for a Western chef’s knife or Japanese santoku to do: dice, mince, and julienne vegetables; chop herbs; and slice boneless fish and meats, both raw and cooked. 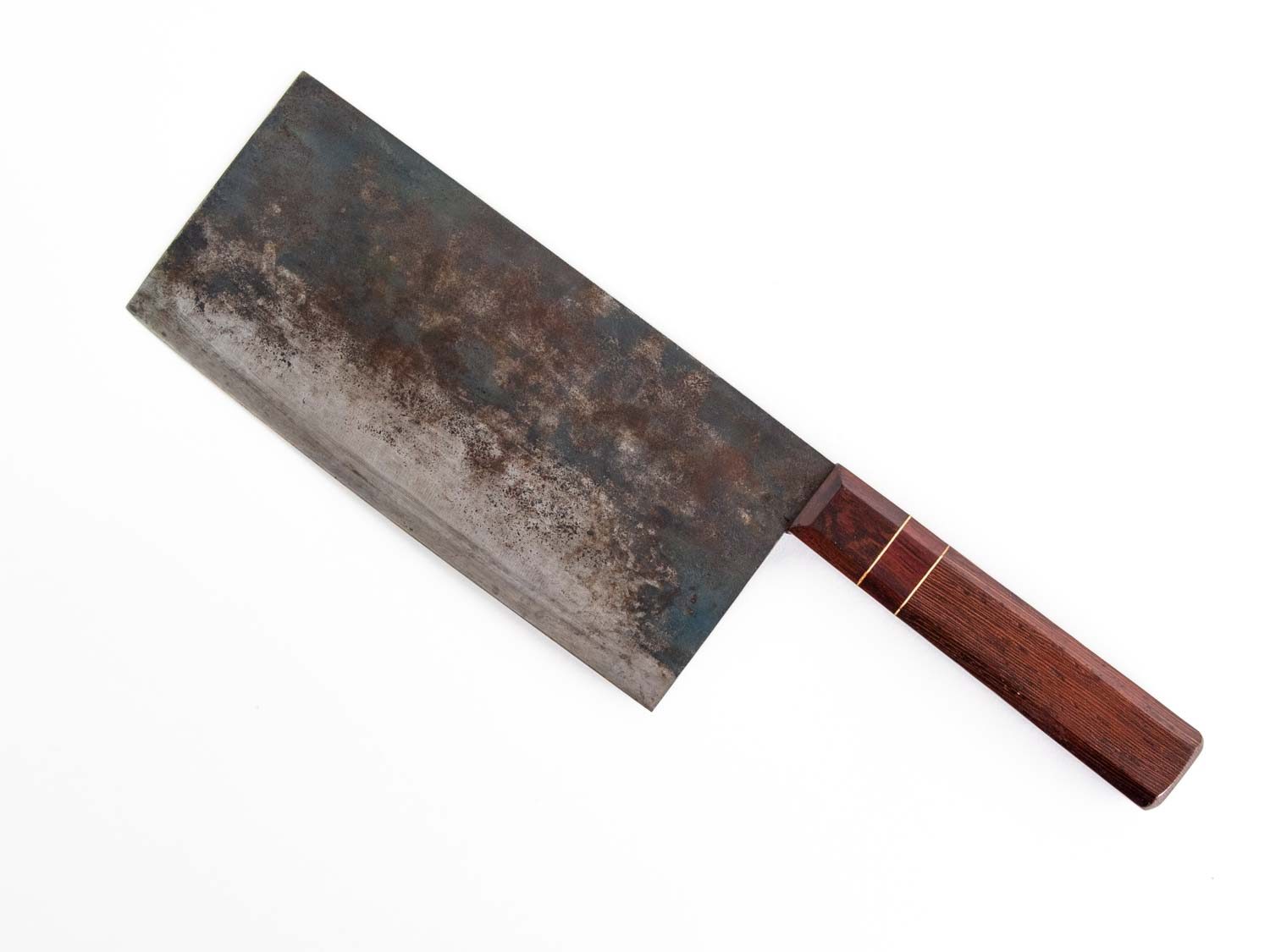 A Chinese-style knife made in Vietnam; this is the one Sho bought.

The form of the Chinese-style knife takes some getting used to compared to Western and some Japanese knives—your hand is higher, the balance is different, and the blade has a minimal (and in some cases no) curve—but with practice, you can adjust to it. Eventually, it becomes clear how deft such a large knife can be.

You’re less likely to use certain cutting techniques that are common to Western-style knives, such as rock-chopping, where you seesaw the blade back and forth along its curvature while keeping constant contact with the cutting board; the Chinese cleaver doesn’t have enough of a curved blade for such back-and-forth rocking. And while it can be used to slice foods by drawing the blade along the food, it lends itself to push-cutting, where you come down on the food vertically using more of a chopping motion. (Chinese knife skills could fill a book of their own, though Fuchsia gives a brief discussion of the basic techniques in her book.)

One of the very best things, at least to my mind, about a Chinese cleaver is that it doubles as a bench scraper. If you’ve been a longtime Serious Eats reader, you know that we constantly recommend a bench scraper, such as this one from Oxo, to transfer prepped ingredients from the cutting board. Thanks to its large profile, the Chinese cleaver has more than enough real estate to scoop up a chopped onion and deliver it to its destination.

This doesn’t fully replace the need for a bench scraper, since I wouldn’t advise using the knife to scrape up stuck-on food bits from a dirty work surface, but it still offers much greater efficiency: Not having to put down a knife and pick up a bench scraper every time you need to transfer something ends up saving a lot of time in the long run.

The question now is whether this knife will reclaim its top position among my vast knife collection. I’m guessing it won’t at work, if only because it might confuse readers to see a Chinese cleaver being used out of context with no explanation. Having the first comment on every recipe I write be, “What’s the deal with that cleaver?” isn’t really my goal. At home, though, I suspect my Chinese cleaver will be in the regular rotation from now on, not necessarily replacing my chef’s knives, gyutos, and santokus, but rounding them out. Though who knows? Maybe it’ll take over, and I’ll eventually forget that all those other knives were once a part of my daily cooking ritual. Until I eventually rediscover them fifteen years later.

All products linked here have been independently selected by our editors. We may earn a commission on purchases, as described in our affiliate policy.

We Should All Be Vegan | Change My Mind

The Best Kitchen Gifts to Splurge on for Your

When I started putting together a list of the best splurge gifts we have in our annual holiday gift guide, all I had to do...

This week's Special Sauce episode unintentionally turned into a carb fest. Although I knew I was having on a couple of the...

Prof. Jeff Volek – ‘The Art and Science of Low

Professor Jeff Volek is a Professor at The Ohio State University, USA where he teaches and leads a research team that explores the...