This healthy Instant Pot Beef and Barley Stew tastes like it has been simmering on the stove all day long but is made in under an hour with the help of the Instant Pot. It can also be made in the slow cooker in case you don’t have an Instant Pot at home.

My family absolutely loves traditional beef stew and it’s something I make all the time. The only problem is that it isn’t one of my favorite dishes. I don’t mind it, but its not something I crave or look forward to eating. Honestly I am normally more excited about the salad and bread that I usually serve on the side. However since it is such a staple in our home, I have been looking for an updated version that will make everyone happy and I found that in this Beef and Barley Stew.

It’s made with a lot of the same ingredients as a traditional beef stew – onions, carrots, celery, potatoes, thyme – but the addition of the barley adds something special. It’s hearty, slightly earthy, and adds some much needed texture. I love it.

The other secret to this stew is using hash brown or shredded potatoes. I learned this trick from Marzia at the Little Spice Jar and I love it. By adding shredded potatoes, you are able to get a little bit of everything in a single bite. Plus it guarantees you won’t overcook the potatoes and turn them to mush. If you buy the frozen or pre-shredded versions, it’s a great shortcut since you don’t have to wash, peel, and chop potatoes. 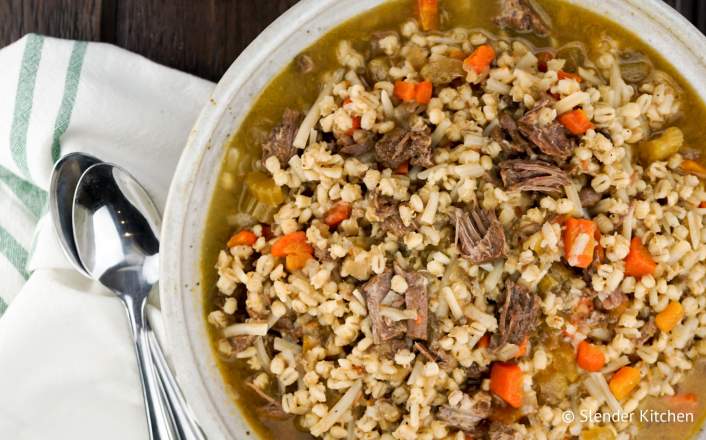 Here are some of the products and tools I used to cook this recipe:

These Gluten Free Peanut Butter Blossoms have all the flavor of the traditional, but using better-for-you ingredients! These peanut...

Using only 5 ingredients, this Peppermint Bark is simple to prepare and perfect for giving away...

Love Trader Joe’s Everything but the Bagel Seasoning but your store doesn’t have it in stock frequently? Our recipe is so easy...

Crispy on the outside and soft and chewy in the middle, these Gluten Free Chocolate Chip Cookies are the real deal. They’re also...